Taking advantage of the expansion and expansion of the airport, talk about the business plan of the terminal building

Taking advantage of the expansion and expansion of the airport, talk about the business plan of the terminal building

With the rapid development of the civil aviation industry in recent years, the existing terminal facilities of most domestic airports have been unable to bear the increasing throughput. Therefore, news of the expansion and expansion of airport terminals in these days has also appeared in newspapers. With such an airport expansion and expansion momentum, Kairui Consulting also wants to talk about the business plan of the terminal building again, because the commercial planning of a new terminal is undoubtedly the largest operating space and the most obvious effect. .

In fact, in the process of communication with some airport friends, it is indeed more and more real feeling that the airport industry attaches importance to the commercial value of the terminal building, such as Shenzhen Airport, Kunming Airport, Nanning Airport, etc., which sent a very strong signal. I hope that I can use the opportunity of the new terminal to put into use, re-plan the commercial layout of the terminal, and strive to achieve more lucrative profits.

The starting point of the terminal business - understanding of consumer needs

a) In the selection of the scope of investigation, it should be as comprehensive as possible, and can be distinguished according to different types of people, such as airport employees, passengers, surrounding residents, etc., and can also be distinguished according to different types of areas, such as the restricted area and outside the restricted area. , arrival hall, departure hall, etc., which will help our final planning plan to be more refined and targeted.

b) In the choice of research time, try to match the change of the flight season. The passenger structure and passenger characteristics brought by different flight seasons are different. We suggest that you can select two weeks in the two flight seasons in a year. Conduct research and, if conditions permit, recommend the establishment of a normal consumer monitoring mechanism.

c) In terms of research content selection, according to our experience, consumers' consumption needs in the terminal are generally concentrated in four aspects, retail, catering, leisure and entertainment, and business facilities. In the past, many airports in China often overlooked passengers. Leisure and the need for business facilities, lack of corresponding facilities and equipment in the terminal building.

d), the processing of research data, after the research data is obtained, how to analyze is also a very important link. To get the data that is really important, you need to deeply mine and analyze the data. Some commonly used analysis methods, such as clustering Analysis, factor analysis, cross-analysis, etc., can play a relatively large role in the data processing process. Using results-based thinking to guide analysis can help analysts avoid the confusion and inefficiency of data.

The acquisition of consumption data can also depend on the sales data provided by the operating units in the terminal building. The airport can adjust its own business categories and business strategies in real time based on these data. At this point, the airport and the operators are required to establish good cooperative relations. Real-time control of sales in the terminal building.

1. Commodity planning - the choice of goods/services for the terminal building

In the choice of goods or services, the airport needs to consider the balance between passenger demand and airport revenue in order to be effectively achieved.

2. Business layout of the terminal building

Premise of the business layout of the terminal

a) Airport security is the first priority, which requires the safety planning in the terminal to be considered first;

b), passenger service is the second place, the basic requirement of passengers is fast forward and fast;

The so-called "moving line" refers to the line of people's activities, which directly determines the traffic flow and composition of the shops in the commercial area. Therefore, the layout of the business district should be closely related to it.

The design of the moving line plan should be based on the premise of respecting the aviation principle. First of all, at least a convenient and fast aviation line is guaranteed to meet the passenger's fast-forward and fast-off service requirements. Then, the commercial line is designed around this core line to improve the effective commercial area of â€‹â€‹the airport. Commercial lines can follow the following principles in design:

The business line is mainly aimed at improving the business income of the terminal;

Most high value commodity stores can be considered for this layout;

The dynamic line design should not be too straight to satisfy the fun of shopping for consumers;

The length of the moving line can be appropriately lengthened to increase the number of shops in the front;

Set the core area to collect the flow of people.

The following picture shows the dynamic design and business district layout of the T1 terminal building of Hong Kong Airport. It is quite exemplary: 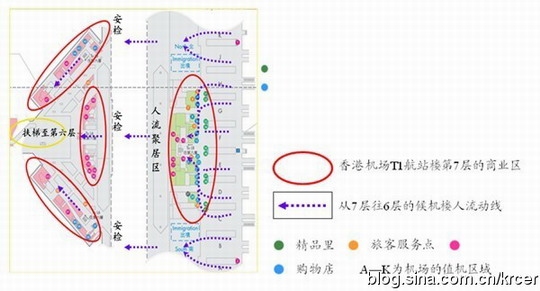 Picture: The design of the moving line and the layout of the business district of the T1 terminal of Hong Kong Airport.

The layout of the business district is concentrated near the human flow line;

At the junction of the restricted area, a concentrated area of â€‹â€‹people flow has been designed, and various kinds of commodity services are gathered here;

After entering the restricted area, three moving lines were planned. In addition to the middle aviation moving line, there are two commercial lines with long paths to create more commercial space.

The shops around the moving line are reasonable:

Catering services are mainly provided around the aviation line;

In addition to a small number of meals around the commercial line, more shopping outlets are arranged.

After completing the planning of the moving line, how to arrange the identified business projects to the planned business district is a very difficult problem. When communicating with some industry peers, they often worry about the lack of a systematic methodological guidance. By feeling, pat the head to complete the layout, lack of confidence in the final result. Based on years of research and practical experience, Kairui has developed a methodology that combines the characteristics of airport terminals â€“ magnet theory, which has achieved good results in the practice of multiple airports.

a), the first magnet point: the location with the highest population density, magnetic concentration, the strongest magnetism

Generally distributed in the departure hall, shouldering the heavy responsibility of creating a business atmosphere for the entire terminal, it is necessary to stimulate consumption as much as possible, and try to choose the goods with strong demand and high purchase rate.

Generally speaking, the distribution is just after the security inspection area, the passengers' mindset is relaxed, and the sales convey the best value. Consider the layout of boutiques, restaurants, coffee shops, leisure facilities and other services.

c), the third magnet point: the flow density is gradually reduced, the magnetic is weak

Passengersâ€™ willingness to consume is reduced. It is necessary to highlight the visual effects of the store or the goods, or display methods, to attract consumers with individual items, and to layout jewelry & cosmetics, specialty stores, boutiques and other formats.

d), the fourth magnet point: if it is not necessary, the passenger does not reach the area, the magnetic is the weakest

The population density is small, and it is important to consider the main store that selects the most demanding industry. It is an important magnet point for pulling the flow of people in the terminal building and revitalizing the whole business.

From the introduction of the magnet theory, it can be understood that its application should be combined with the commodity planning mentioned above. For example, in the magnet theory, the layout of the main store is very important, and it guides the flow line inside the terminal. The role is very critical, and the main store itself is not necessarily, each airport has the characteristics of each airport. For example, in the airport in the northeast region, foot bath massage in the terminal is a relatively demanding service. It can be considered as the main store in the fourth magnet point layout, but in some airports in the south, the demand for foot bath massage is weak. Therefore, after the product planning, we should have a clearer understanding of the main store in the terminal building.

In general, using only the magnet theory can help the airport increase business income by about 30%.

The above is a relatively complete terminal business planning process, and a relatively systematic and effective planning method developed by Kairui Consulting over the years. I hope that this round of terminal building renovation and expansion will help the domestic airport to continuously improve. Your own business performance.

We has a big selection of your pet's favorite Dog Treats. You'll find bones,

baked doggie treats, rawhide for dogs, and much more.